After a relatively uneventful flight from Montreal, Maxine & I arrived just after 7am in Casablanca. Getting off the plane was painless however getting through Customs was not. Long line, early morning and only 4 agents open. Got luggage, got local currency from the ATM then took a cab to our hotel starting point. We were hoping to be able to leave our luggage and tour a little of the city but we were surprised to be able to get our rooms.

Maxine had checked out a ‘list’ of top things to do in Casa with 1 day. We took a cab to the Habous (hab-oose) area of the city - basically a marketplace area with lovely buildings and shops. 2 mosques as well. We were on the hunt for ‘cornes de gazelle’ - gazelle horns - a little filled pastry with almonds and rose water. Didn’t know where the shop was in Habous but I figured we’d just happen upon it. We saw a section with clothes, another with footwear, beautiful mosaic-decorated doors and walls and then we smelled baking! Sure enough, the next street down, we found Patisserie Bennis Habous. 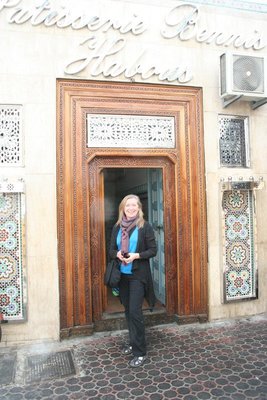 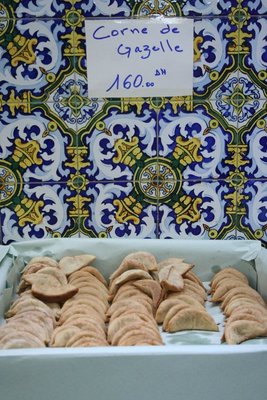 A simple little shop with a LOT of pastries available. We chose 2 each of 4 different pastries - by weight, the price was about $2.00. After it was boxed, we explored a bit more and found an open-air cafe. We bought Moroccan Mint Tea, sat in our chairs and relaxed. The cornes de gazelle were lovely but it was a sesame sandwich pastry that was the star of the show. I was expecting ‘tasty’ but I wasn’t expecting FABULOUS! Although it was probably almond, the filling reminded me of a hazelnut filling with 2 thin wafers of sugary sesame seeds. Lovely & relaxing. 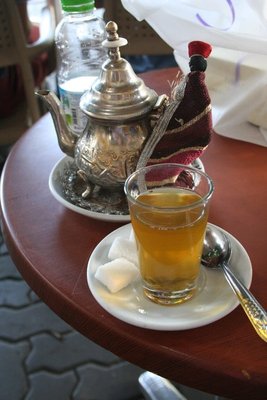 Next stop was the Hassan II Mosque. It’s the 3rd largest mosque in the world with the tallest minaret. 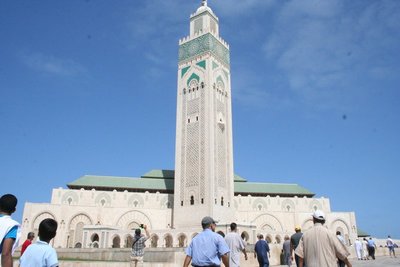 This place can hold 25,000 worshippers! The ‘call to prayer’ started as we arrived so we knew we wouldn’t be able to do the tour for awhile. That ‘awhile’ ended up being almost 2 hours. But 3pm arrived, we found the tour start point and were amazed. The craftsmanship in this building is nothing less than stunning. Then we’re told it was built in 6 years with over 10,000 craftsmen - just WOW.

Back at the hotel a short nap and then we started our TOUR! We’re a group of 10 - 3 from Australia, 3 from the United States and 4 from Canada (although one is a transplanted Aussie). Went for dinner (beef tagine with prunes and fish tagine with vegetables-MMM), stopped to buy water for tomorrow’s adventures then back to the hotel to organise, fill out some paperwork and SLEEP!

We’ll be riding the rails tomorrow - out of the big city and into a smaller but important village with an overnight in a guesthouse and I'm sure lots more great food to come.

Posting this for now and will edit/add when I get a faster internet connection. Sorry but stay tuned!!!

Previous Next Table of contents

This blog requires you to be a logged in member of Travellerspoint to place comments.

If you aren't a member of Travellerspoint yet, you can join for free.